For the last three years, we have showcased adaptive reuse projects in Philadelphia during their construction phases. We created Home Sweet ‘Hood to grant access to unique projects in their early stages and hear behind-the-scenes stories from the change-makers who are transforming exciting spaces in the city. 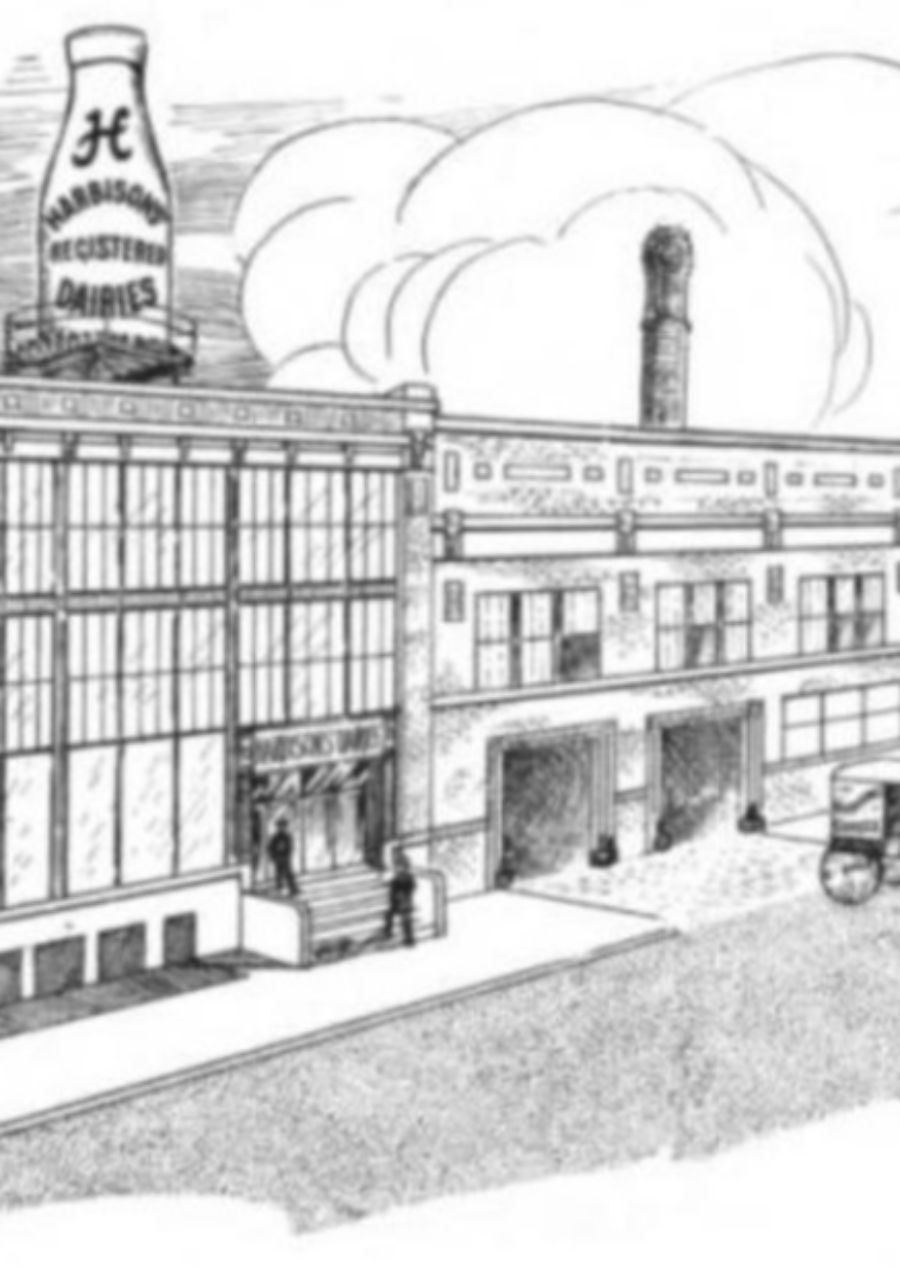 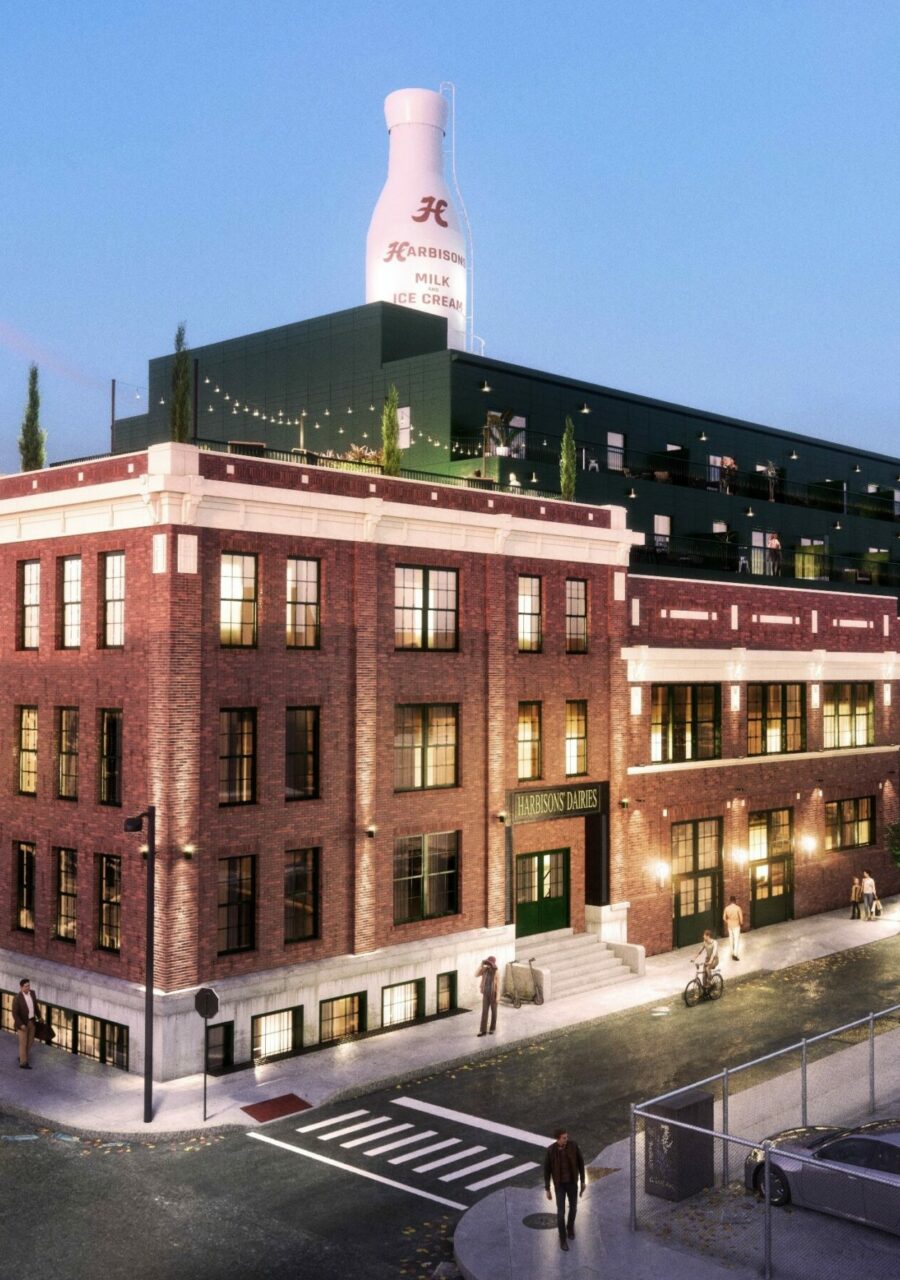 If you’ve ridden the Market-Frankford line between the stations of Berks and York Dauphin, you may have seen the 120-year old-milk bottle water tower – Harbisons Dairy. This iconic Philly landmark opened in 1865 and would deliver fresh cold milk daily by a milkman in a metal tray to resident’s doorsteps since refrigerators were not a common household appliance until the late 1920s.

The factory prospered until the 1960s when it began to close down and sell off its infrastructure. Shortly after, the warehouse and tower began to deteriorate, eventually becoming a vacant black hole in Kensington. After much back and forth, The Historical Commission voted early 2018 to protect the milk bottle and the industrial building that it crowns.

A look inside the project

The factory will take on new life as a mixed-use home base for Philadelphia’s creative types. As part of the 2019 DesignPhiladelphia Festival, guests were able to enjoy a hard hat tour of the site, see the project in its early construction phase and experience the well-known milk bottle restoration underway with space activation courtesy of Rohe Creative.

Guests had an opportunity to ask questions directly to the team behind the redevelopment in a small panel setting that was guided by our own Creative Director, Dylan Garner. Attendees also heard from SgRA Architects about the history of this iconic building and the Rohe Creative team on the inspiration and direction for the future interiors.

We want it to fit the neighborhood, honor the history, and create a place where the community can gather. That balancing act was one of the most challenging parts of this project.

This project means a lot for the area. The massive windows won’t be boarded up anymore and the milk bottle will be repainted to look just like it did in 1950, the way your grandparents knew it. There will be 100 employees working here during the day, and the public can use parts of the space as well. The reactivation of this building will help turn Kensington back into an industrial powerhouse without destroying its history. We’re bringing this place back to life, and we’re really excited about it.

Following this insightful chat, Southwood Developers led attendees on a hard hat tour of the active construction site. They showcased some of the original features such as finishes and tiling of the building and how they will be incorporated in the redevelopment as an ode to the building’s roots.

This is a unique property with a storied history that we intend to weave into messaging and visuals that we showcased on mood boards for the event. Activating the building’s rich history of fonts and imagery aided our direction and helped maintain authenticity as we crafted the brand.

The story of Martha

To finish off the evening we walked over to Martha for an exclusive menu sampling of hoagies, charcuterie and veggie plates along with natural wines and cocktails. As early restaurateurs in Kensington, we thought it was important to hear from Martha co-owners Jon Medlinsky and Mike Parsell about their inspiration and anecdotal stories of their time spent creating a neighborhood favorite.

Their emphasis on plant-forward cuisine is uncommon, especially when paired with their love of fermentation and natural wines.  Martha has been a part of Kensington since 2015, and in many ways set the meter for a lot of redevelopment in the area, including Harbsions. Martha served as a natural ending point for the evening.

We are so grateful for yet another sold out experience and are aiming to make Home Sweet Hood a more regular affair! Sign up for our newsletter to get exclusive invitations before tickets go on sale to the public.

Authentic and Cohere Team Up for The Beauty Shoppe